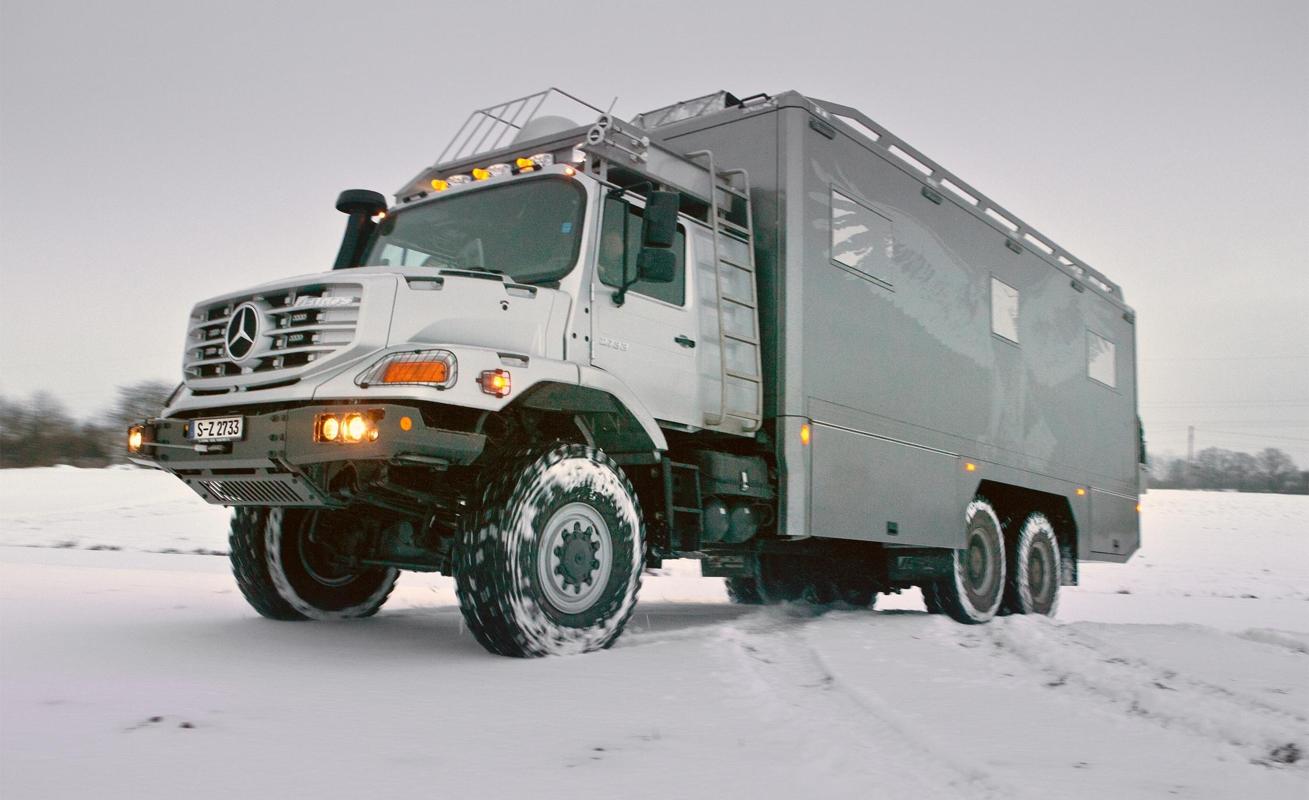 Texas Tiny Homes loves four wheelin’ in the snow and exploring the great outdoors, but the Zetros’ 2733 Mercedes 6×6 takes that to a whole nutha’ level, providing luxury in any environment … even a zombie apocalypse!

The Zetros 2733 has three axles, effectively turning it into a six-wheel-drive tank. The engine alone is a torque monster of a 7.2-liter diesel inline six-cylinder. It pumps out 326 horsepower and a thumping 959 pound-feet of torque. Frankly, with that much torque, the Zetros should come with a warning sticker not to make full-throttle runs too often, as you might cause earthquakes on the other side of the globe.

You can either send that tectonic level of torque through a sturdy Allison-sourced six-speed automatic or a hydraulically shifted nine-speed. The nine-speed uses eight forward gears and a gear for crawling. All three differentials can – of course – be mechanically locked.

Now here is where the really cool part comes in. Two Mongolian businessmen hired Mercedes to build two copies of these brilliant trucks with a whole host of extra features.

These one-off versions include an RV like living space styled in a very luxurious fashion. This means two flat screen TVs, heated marble floors, Bose sound system, shower, and everything but the kitchen sink in order to survive whatever life throws your way. Oh, and it’ll be a life of pure extravagance, if you couldn’t tell.

Everything in the RV section is powered by a diesel generator or by battery. If those fail, the Zetros can use solar panels installed on the roof. If that isn’t enough, the owners can even bring  an ATV inside of the cargo space as well.

Although the businessmen claim to be using it for “fox hunting” in the deserts and forests of Mongolia, it sounds to me like they are actually testing it out for the end of the world. I might just have to request one myself, just in case the Zombies really do come.

What would you fit your custom, end-of-the-world 6×6 with? Consider going over to our to see what extra toys you could stock up on.

The beaut above is a 1983 Eagle that gets an eco-friendly seven miles per gallon when the generator is running. It’s got crushed velvet curtains, and — just a guess here — a few dozen places to hide your weed. Because, oh yeah, it’s Willie Nelson’s old tour bus, and it’s hard to look at without daydreaming about living a life on the open road in all the glorious comfort she no-doubt offers. If you want it, you should act now, because the guy who listed it says his phone hasn’t stopped ringing since he listed it on easttexas.craigslist.com Sunday night. “It’s been non-stop,” he says. “I’ve gotten calls from as far as Washington state and New York,” he told us when we called him ourselves. His name is Alan. He was very polite (naturally — Texas). Here’s the story he gave us about this treasure.

Alan works in IT and listed the bus for an older friend who isn’t quite so tech savvy. That friend does lots of business in and around Texas and its neighboring states, and so when he was tipped off to something rumored to be Willie Nelson’s old tour bus being sold in Alabama, he checked it out. He bought it “three or four” years ago, and has used it frequently ever since. He’s “giving up the hobby” and is ready to unload it. He owns “several other vehicles” according to Alan.

Alan says the frequent calls he’s fielding from curious buyers are 75-percent serious. Some, like us, just have questions.

The bus is one of two identical custom-made for Willie, and it had three owners before the fella Alan is selling it for got hold of it. The interior is in excellent condition (as you can see below) and the only problem with the exterior is a couple spots of peeling clear coat. The generator was serviced three years ago and electrical in the bus has been well maintained over the years.